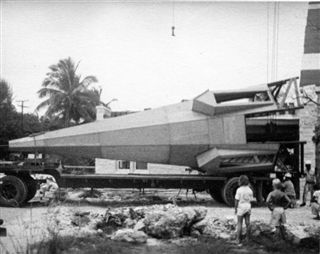 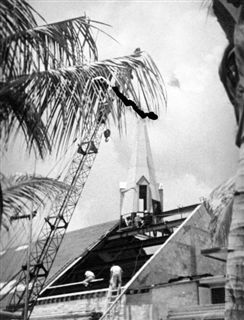 The Story of a Very Special Steeple
By: Ann Rose

Almost 60 Years Ago…
The history of St. Thomas has been symbolized by its steeple, its “Golden Spire,” for almost 60 years – in South Florida, that’s a long period of history! St. Thomas began worship services in 1950 in a tent on the new property on the corner of Red Road and North Kendall Drive. At the end of one decade of rapid growth and building, the first rector, Fr. Arthur Rantz, was holding worship services in the new sanctuary, under a steeple that would become a landmark in the surrounding area. The school song, still sung by students at St. Thomas Episcopal Parish School, was “The Golden Spire,” written in those early years by assistant principal Roberta Gilmore.
1960 – The steeple arrives on a flatbed and is put into place by a crane. 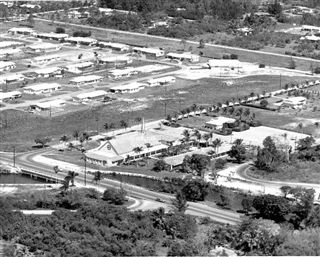 1961 – Aerial view of St. Thomas, its steeple visible for miles around. 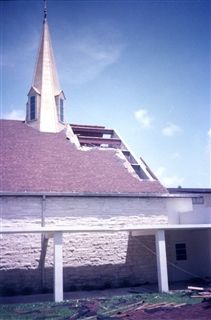 Hurricane Andrew in 1992
The worst damage in Southeast Florida from Hurricane Andrew began at North Kendall Drive and extended through Homestead. The National Guard curfew began at North Kendall Drive (no night meetings or night programs at St. Thomas during the fall of 1992). Numerous landmarks, along with traffic lights, street signs, huge trees, and buildings were no longer there, and even long-time residents were disoriented when they drove around. But one landmark that people later described as a beacon of hope was the steeple of St. Thomas. It was damaged, but it was still in place. Water had poured into the chancel under the steeple, causing major damage to the organ, including the pipes and console, but the steeple still stood, and eventually repairs were made.
August 1992 - St. Thomas after Hurricane Andrew 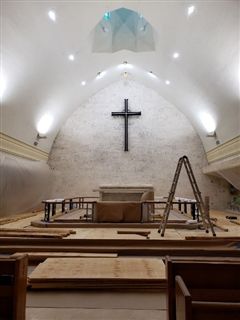 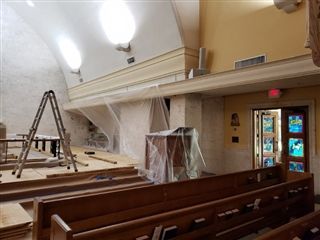 Recent Years and NOW!
In recent years as the steeple has aged, leaks have been occurring and water has been making its way inside, causing plaster to fall on the altar occasionally and staining the inside of the dome as well as indicating structural problems. In addition, the lights that illuminated the stained glass had long since burned out and couldn’t be reached to be replaced.
By the end of the 2018-19 school year, funds had become available to repair the steeple. Over the summer, church services were moved to the Becket Chapel, and the entire altar area was covered with plywood and cardboard. A wall of plastic was installed between the altar and the pews to minimize construction dust and debris from getting into the rest of the church and the organ in the loft. Scaffolding was erected for workers to access the dome and the inside of the steeple. On the outside of the building, ladders and lifts enabled the workers to reach the steeple.
July 2019 – Steeple repairs underway
By the end of the summer and beginning of the new school year, the sanctuary was open for use again, with the leaks repaired and sealed, and the outside painted to match the original color. The stained glass outside was covered with protective plexiglass. Inside, the dome and interior of the steeple had been repaired and painted. The original lights had been reached and replaced by energy efficient LED lights that produce the same amount of light as originally intended. 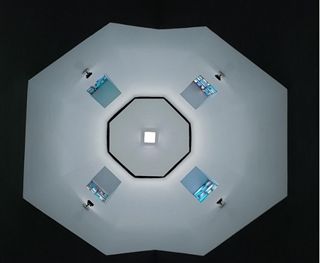 Late August 2019 – The repaired steeple, picture taken from the altar directly under it. 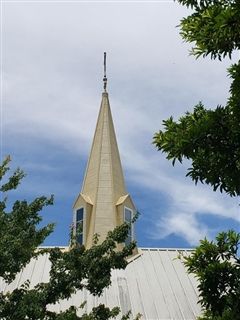 The repaired steeple painted to match the original color. 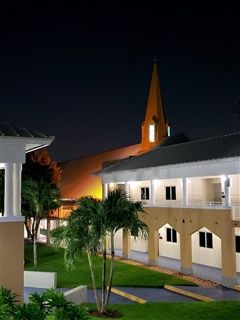 The repaired steeple at night, with lighting through the stained glass as was originally intended.
The steeple – the “Golden Spire” – at St. Thomas is extremely significant to the church, the school, and the surrounding community. It is historically, aesthetically, and emotionally important. A special thank-you celebration will honor the people who donated, contributed, and worked to restore this beloved piece of architecture.